Thank you for your business!You should be receiving an order confirmation from Paypal shortly.Exit Shopping Cart

The above pictures of GCS 50V, Next to sister vehicle GCS 35V were taken

on the day I collected her from West Coast Motors.

Leyland Leopard GCS 50V was bought by myself, Kenny Barclay on the 18th May 2007 for preservation from West Coast Motors. This was the first Clydeside Scottish vehicle I purchased and I decided to restore and repaint her in the original Clydeside Scottish Livery of Red and Yellow as worn by Clydeside vehicles from 1985 till 1989. I have always felt this was a fantastic bright and colourful livery and to my knowledge there are few vehicles in preservation in this livery.

I was brought up in Kilmacolm, Renfrewshire during the 1980's and 1990's and Clydeside Scottish was therfore my local bus company. In June 1988 I started a summer job working for Clydeside Scottish at their Johnstone Depot, the same depot that GCS 50V first entered service eight years previously!

After my summer job finished I found I had developed a strong interest in the Clydeside Fleet and company developments, it was for this reason I decided that when the time came for me to purchase my first bus it would have to be an Ex Clydeside Scottish vehicle!.

When the time was right for me to preserve my first vehicle there were very few ex Clydeside vehicles left. Many had either been sold for scrap or exported to either Asia or Ireland for further use. In April 2007 I was informed from a reliable source that West Coast Motors were still operating not one but two Ex Clydeside Leopards at their Ardrishaig Depot. After contacting the company I was told that both GCS 35V and GCS 50V were due to be withdrawn from service shortly and I could make an offer on either vehicle which would be considered.

In late April 2007 I headed up to Ardrishaig early one Saturday morning to inspect both GCS 35V and GCS 50V. Although both were in fantastic condition for their age, GCS 50V was clearly in better condition. Just before I left the depot a member of staff asked if I would like to go for a run in her, she started first go and after a few minutes and the air was built up we headed into town. It was great to be back out on her again, first time in many years! The driver took me for a short trip around Ardrishaig including some alarming hills and I was pleased to find out the brakes were just as good as the engine!

Once I arrived home I put a formal offer in to West Coast Motors for GCS 50V which was accepted on 18th May 2007. She was collected and moved down from Ardrishaig on Wednesday 30th May 2007. Since the vehicle still had a current MOT, tax and insurance she was able to attend the Kilmarnock Stagecoach Western open day on Saturday 9th June 2007. The open day was to mark the 75th anniversory of Western SMT and this of course was the Company my vehicle entered service with in 1980.

Please have a look at the photos page, this contains pictures taken during my inspection trip to view GCS 50V at Ardrishaig in April 2007 and of the various trips out and open day events she has been involved with. There are also photos of her in service during her 27 years in service. Over time more pictures will be added.

Below is a brief history of the vehicle from the information I have to hand, it is my intention to develop this website further over time and hopefully add more pictures of GCS 50V both in service with the various companies she has worked for over the past 27 years, and also of the restoration project.

If you have any photographs, comments or further information please get in touch!

Thank you to "Bus lists on the web" for above information!

Thank you to Gordon Bain and the Western Enthusiast Club for much of the above information.

Please, Please get in touch! I would be delighted to hear from you.

Wednesday 30th May 2007 was the day GCS 50V moved from Ardrishaig to her new home for preservation. Since I had still to pass my PCV test George, a friend and fellow bus enthusiast kindly offered to be my driver for the day. It was an early start that morning, having left the house at 5.30am I collected George in Glasgow just after 6.00am and we had a good clear run to Ardrishaig arriving just after 8.00am. As we rounded the corner just before Ardrishaig we could see the distant shape of a leopard out in service, as we got closer we were pleased to see it was not GCS 50V but her sister GCS 35V getting ready for her first School run of the day. Upon arrival at the depot GCS 50V was awaiting our attention. We were introduced to "Goldie The Boss" who had kindly kept GCS 50V off the road to allow us to make a start on selecting the parts to be exchanged with her sister GCS 35V and after a quick coffee we set to work selecting the seats and air vents to be removed.

By the time GCS 35V arrived back at the depot around 9.00am most of the seats to be exchanged were ready. After another hour of hard work we were finished and ready to hit the road, West Coast Motors had kindly agreed to fuel the vehicle for the journey to Ayrshire, and after the fuel was topped up it was time for GCS 50V to leave Ardrishaig for the last time.

Getting fuel, ready to leave Ardrishaig for the last time for the journey home!

It was not going to be a direct run however. George was interested in an Ex Midland Scottish, Leopard which was based in Oban with West Coast Motors and it was decided we would take GCS 50V to Oban with us while we looked over the Midland Leopard. We had a great run over the A816 to Oban, not the best road for taking a 53 Seat bus for a run but very scenic all the same. We arrived just outside Oban in around an hour and found ourselves in a very large traffic jam. A crane had got stuck under the railway bridge just outside the town centre. Although we wanted to turn left before the bridge, with the traffic this would not be possible.

After the best part of an hour, we finally arrived at the depot in Oban, as you will see from the pictures taken at Oban the destination display was now set to Private so as not to confuse the locals too much, while waiting in the traffic jam we had to ask a few locals to leave the bus since it was not in service!

Back in Oban one last time! GCS 50V has a short break before hitting the road again.

Just before leaving Oban, In the background can be seen one of the "new" dart buses due to replace GCS 50V and the rest of the Leopards shortly.

We finally left Oban at 2.30pm and started the long 101 mile journey home. My sat nav unit confirmed the journey would take 2 hours and 20 mins, By Car! Since we had to be there by 5.00pm we knew we would have to get going and fast! The journey was uneventful and GCS 50V put in a fantastic performance sitting right behind me at 60mph most of the way! As anyone who knows the A82 along the banks of Loch Lomond will confirm, this is not the best road to be taking a large bus especially when you meet a large HGV on the tightest bend in the road! I was however happy my bus was in the safest hands, It was however later that night that George confessed he had never been down that road before and there was only a few inches clearance to spare when we passed the HGV! Best I didn't know at the time, but I am pleased to confirm we arrived, on time just before 5.00pm.

Thank you again George for all your help that day, much appreciated 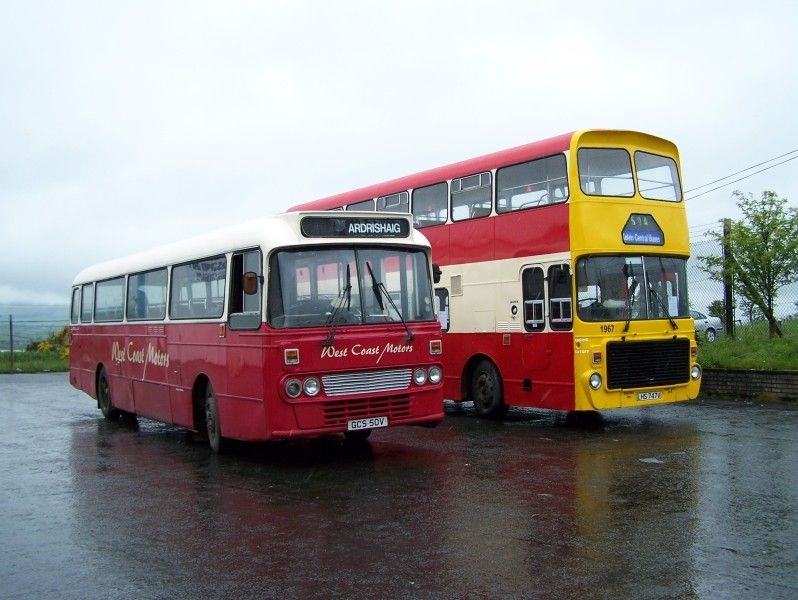 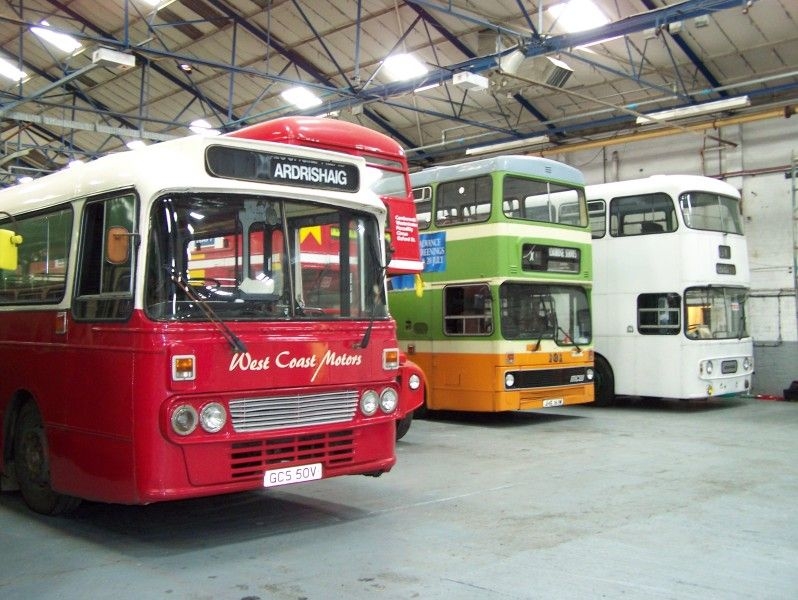 And finally home safely at rest inside along with the other residents, everything from an Ex London Transport Routemaster to a Glasgow Corporation Leyland Atlantean.

Finally after a long day GCS 50V at her new home.

GCS 50V Back In KIlmacolm With Happy Owner!