Rodney The Routemaster - The Rodney Trilogy 2012

The "Rodney The Routemaster" series of books by former Clydeside Scottish General Manager George Watson, is based loosely on the exploits of RM652, the first Routemaster to work in the Scottish Bus Group. After an eventful career, RM652 eventually returned to London where it continues to work on heritage service 15.

Shortly after arriving in Scotland RM652 was given the name Rodney and a popular booklet "Rodney The Routemaster Comes To Town" was published aimed at children aged 2 and over as part of a campaign linked to the local introduction of large numbers of Routemaster buses.

Now the original book from 1985 has been fully reworked and expanded. Combined with two all new books, they are "The Rodney Trilogy". All the stories are light hearted versions of real events that involved Clydeside Routemasters, as well as during Rodney's later journey back to London.

Each book is illustrated in full colour by Tony Van Bruegal the original artist.

Available separately there is also a colouring book and wrapping paper. A wall poster that is included with the trilogy can also be purchased separately.

The Rodney The Routemaster products can be purchased from the usual outlets, direct from George Watson or from myself as follows:

All orders attract a fixed postage charge of £3.00

Books can be signed by George at no extra cost, please just state if you wish the books to be signed or not.

CLYDESIDE SCOTTISH - We Tried To Run A Bus Company But... 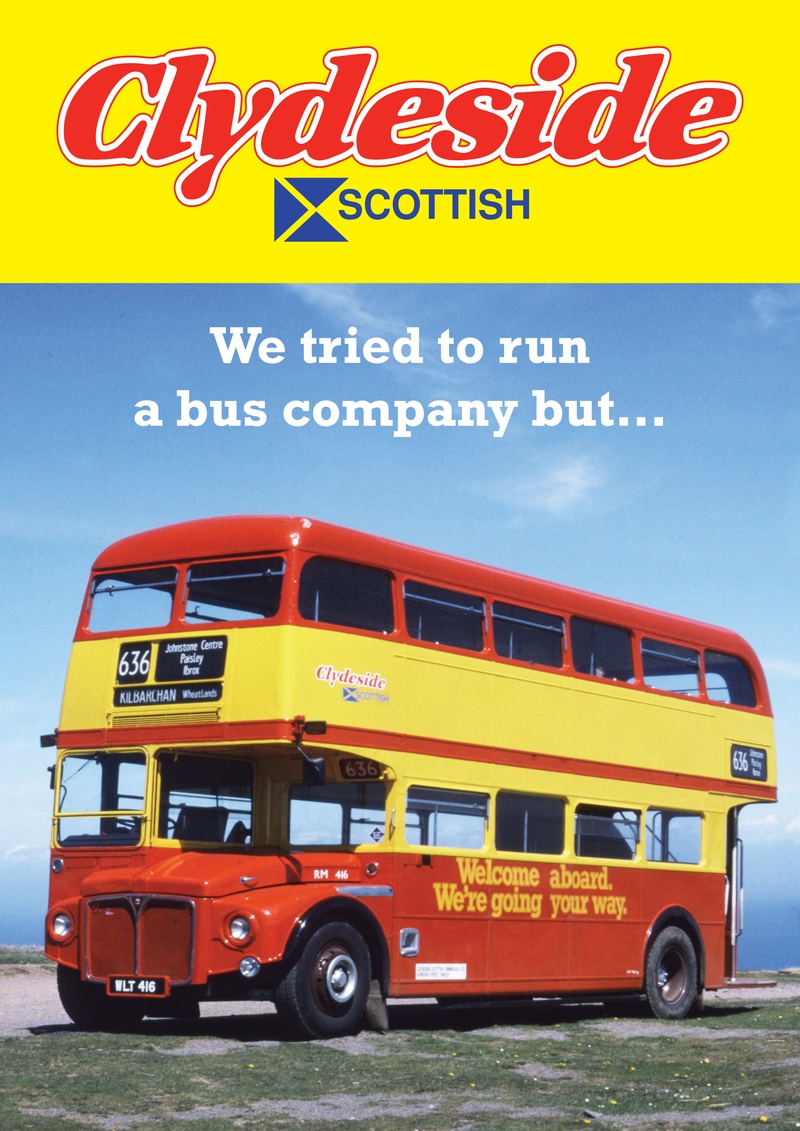 Clydeside Scottish Omnibuses Ltd was a bus company that was destined to last a little under 4 years. In that time it   established itself so firmly in the minds of staff and customers that it is still remembered by many with affection. This is  reflected in four buses being preserved in Clydeside Scottish colours and the interest they attract.

Noted for its innovative approach to marketing and competition at the time of industry deregulation, including the use of ex-London Transport Routemaster buses, there were strong pressures behind the scenes that the management had to deal with at the same time.

Indeed history suggests that, for reasons beyond the control of local management, the company almost immediately ran into an unanticipated major problems which were a key factor in the company’s turbulent subsequent history.

In this new book, "Clydeside Scottish - We tried to run a bus company but ..." the turbulent history of the Company is charted in detail, including the commercial strategy and the process leading to privatisation.

In the author’s opinion, the demise of Clydeside Scottish Omnibuses Ltd. is a story of naivety, unprofessionalism and ultimately foolishness at both corporate and political levels. This resulted in yields from privatisation that, again in the view of the author, were way below their potential if common sense had prevailed and all-and-sundry not interfered.

The author, George Watson was the former General Manager of Clydeside Scottish Omnibuses Ltd. and, with the help of many members of his former management team, he has produced a fascinating comprehensive history of the Company which survived until 2012 in much changed form as Arriva Scotland West.

This attractively produced book with 148 pages includes around 60,000 words and 300 images, mostly in colour. It will also be possible to purchase copies of the original 1985 children’s storybook "Rodney the Routemaster comes to town" at the same time.

George Watsons eagerly awaited book "Clydeside Scottish. We tried to run a bus company but..." was launched at the Glyhill Hotel, Renfrew Road, Paisley over the weekend 5th and 6th March 2011. The first few copies of the book were available to look over during the event and I can confirm George has produced a fantastic, well illustrated and interesting book. The book can be purchased from the usual outlets or direct from George or myself as follows:

LIMITED TIME SPECIAL OFFER!! If ordered from myself mention this website and get FREE DELIVERY. Also for and additional £1.00, a copy of George Watson's original book "Rodney The Routemaster Comes To Town" can be included (please note! this offer is for a copy of the ORIGINAL Rodney the Routemaster book from 1985). Both books can be signed by George at no extra cost!!

On the Saturday GCS 50V attended the first day of the book launch at the Glynhill hotel, Paisley. She was joined in the car park by fellow G.V.V.T preserved S.B.G vehicle, Central Scottish Volvo Ailsa LHS 747V. The day was fairly low key and a good chance to catch up with George and friends at the hotel. Later in the day Alan Miller editor of Buses magazine visited and interviewed George about his book. Some photos from the Saturday are below. 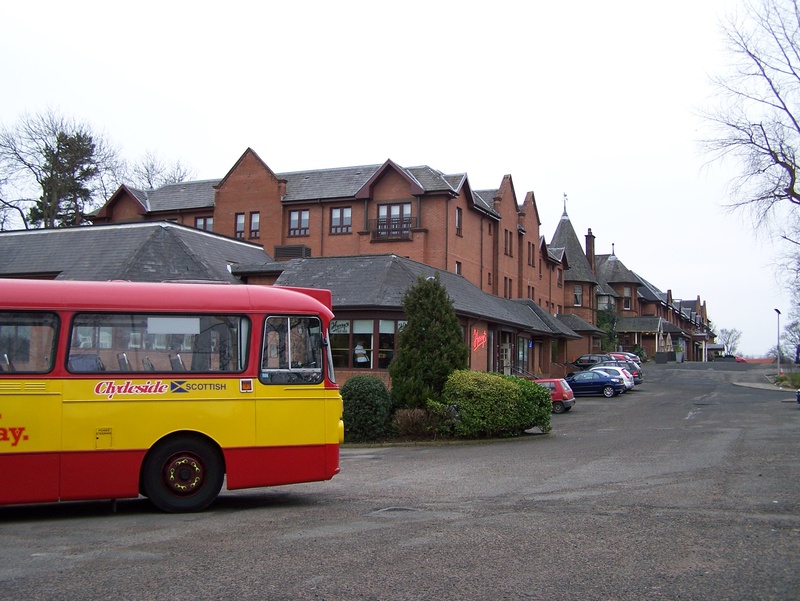 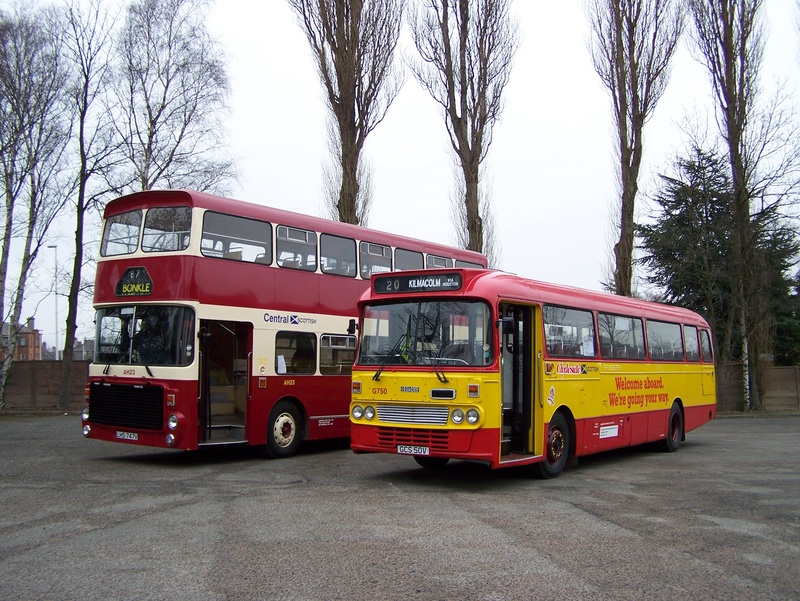 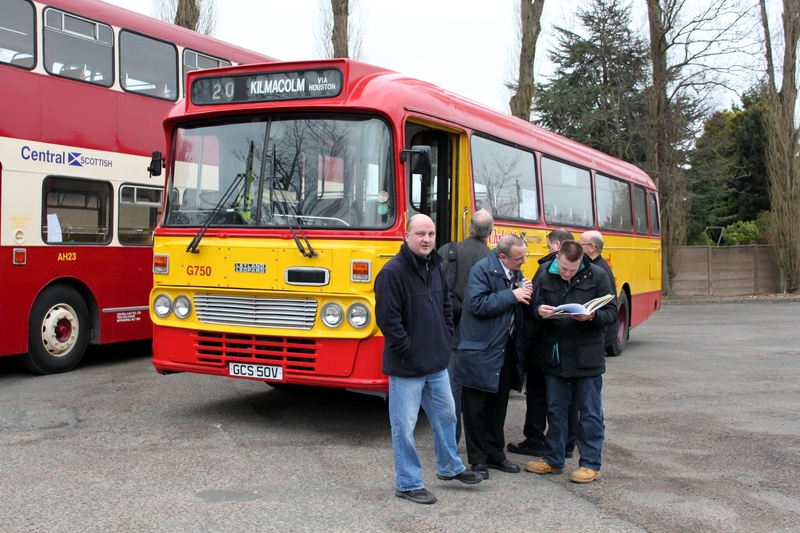 Hugo Gilmour, Donald Watt, Alan Miller and others have a look at the book and the bus! Photo Copyright Donald MacRae. 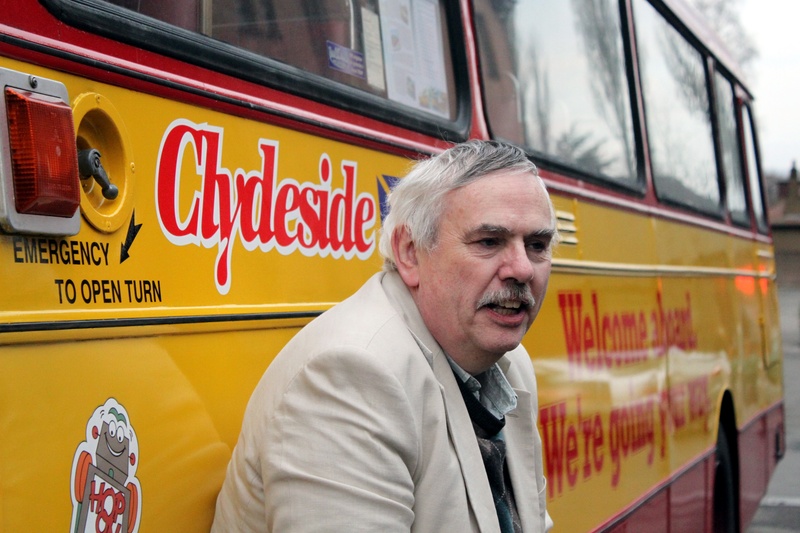 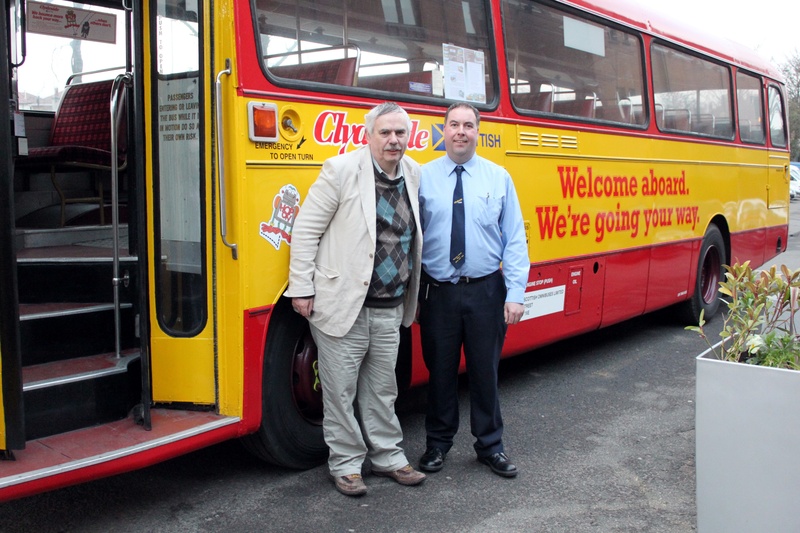 The day started early at 9am! Collecting George and friends from the Glynhill Hotel, We proceeded to Glasgow Airport and collected more of George's friends. Next stop was Arriva's Johnstone Depot both a former Clydeside Depot and a Depot where GCS 50V was allocated. We were met by Richard Hall the new Arriva Managing Director and Richard was delighted to show us around his depot and show off the recently repainted Dennis Dart. It was great to see Arriva supporting Georges book in this way. The Clydeside Dart should continue to wear her red and yellow livery for around a year, so should stand out in the streets of Paisley and Johnstone. After Johnstone both the Dart and my Leopard proceeded to Inchinnan depot. This was also a Clydeside depot and a former home for GCS 50V. Again Richard was pleased to give us the grand tour of the depot before both buses made there way to the Glynhill Hotel.

Once we arrived at the hotel, both Clydeside Buses were parked up in the car park as a static display for the afternoon. George had invited more friends and many members of his former management team to join us for the official launch, book signing and lunch. Although copies of the book were due to be delivered in April 2011, George had arranged for a small supply to be at the hotel in time for the launch. It was decided that all former Clydeside employees present that day should sign each of the books, and that these signed books would be given to everyone who turned up.

It was great to meet some of the many wonderful people who played a part in the Clydeside history, and for many it was the first time they had seen a Clydeside bus in years! The day was a great success and I was delighted to be a part of it and help make it a day to remember for George.

After the lunch it was back to G.V.V.T for GCS 50V with a few guests from lunch interested in visiting the Bridgeton garage. 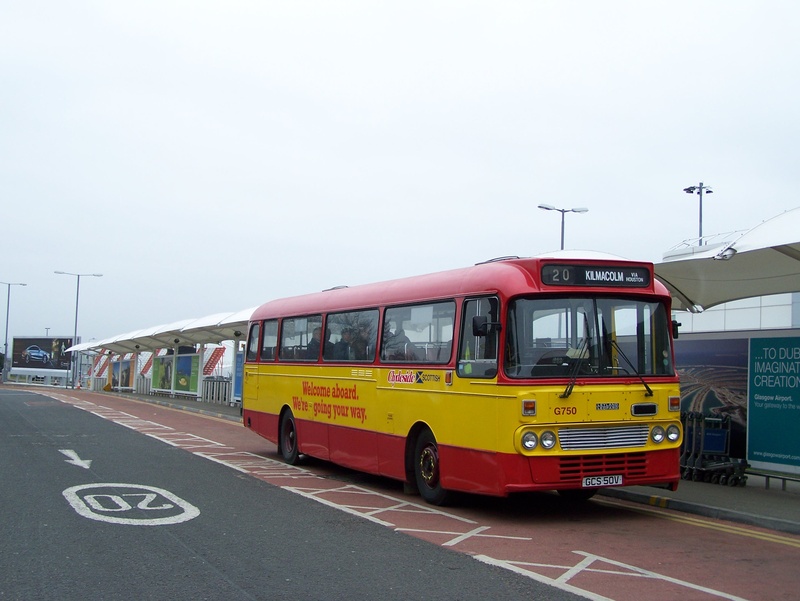 Anyone for Johnstone Depot? 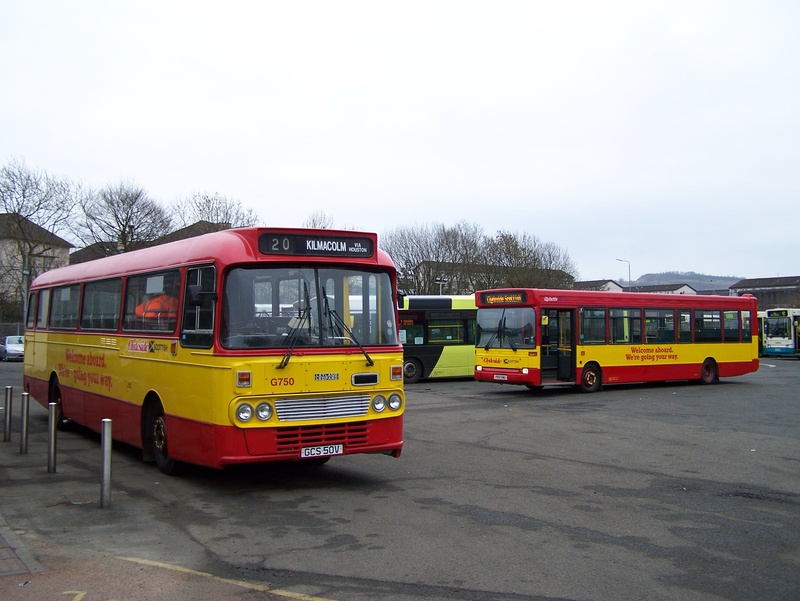 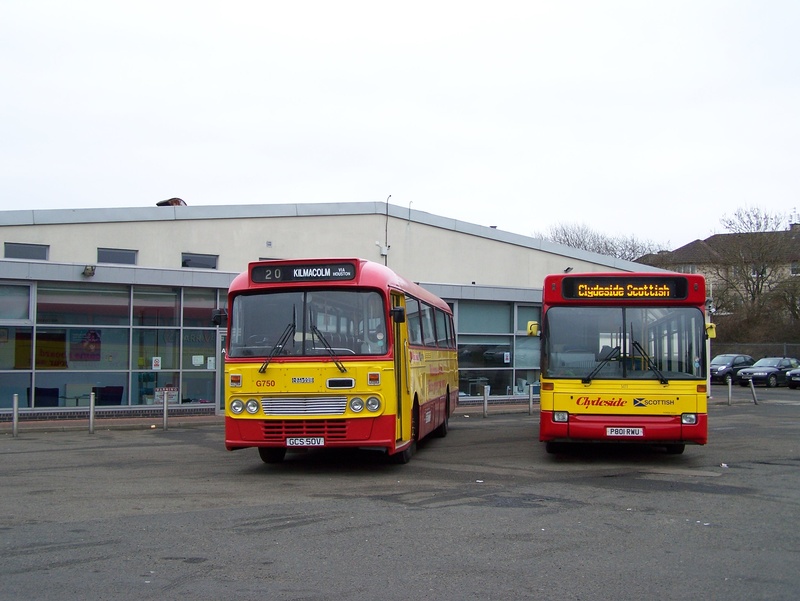 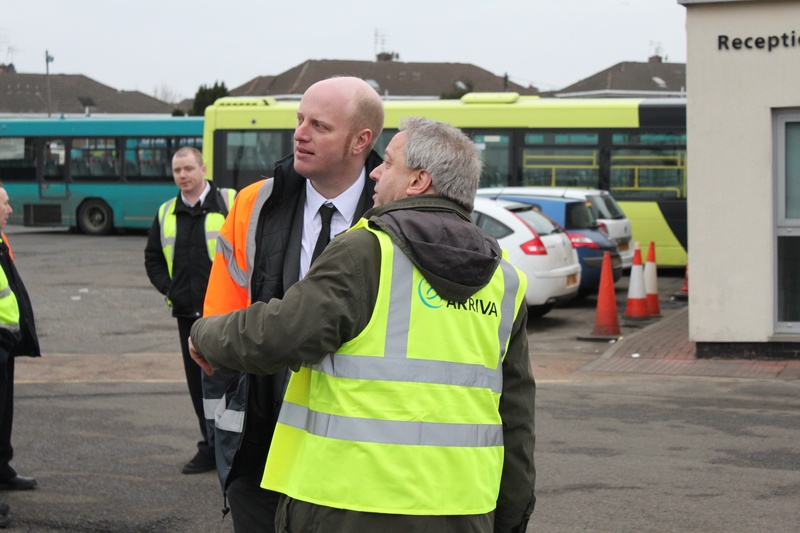 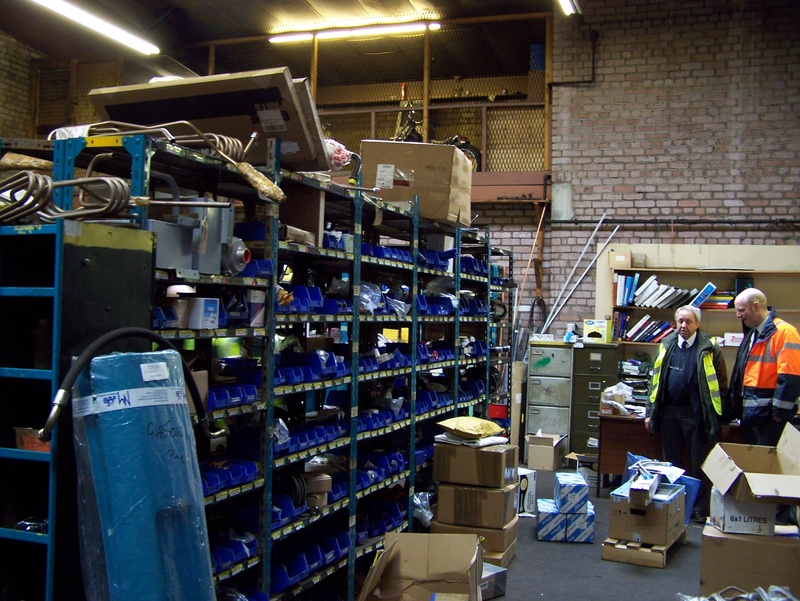 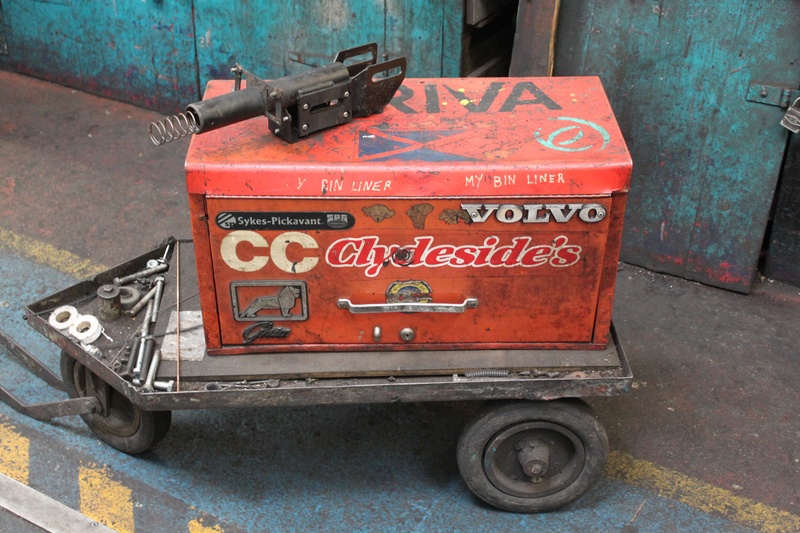 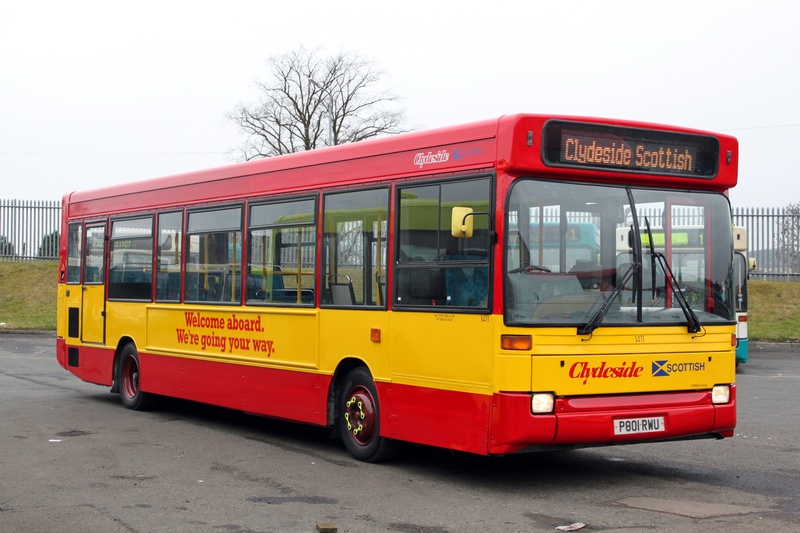 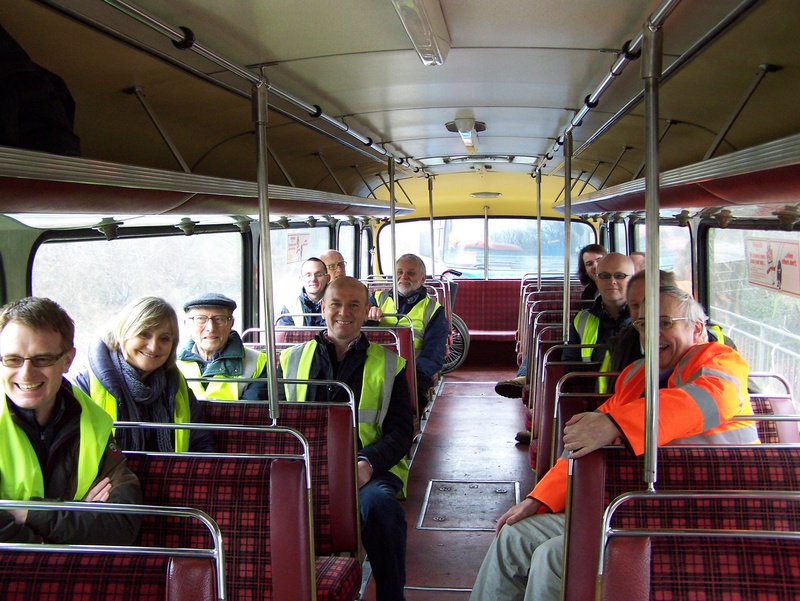 George and guests on route to Inchinnan depot. 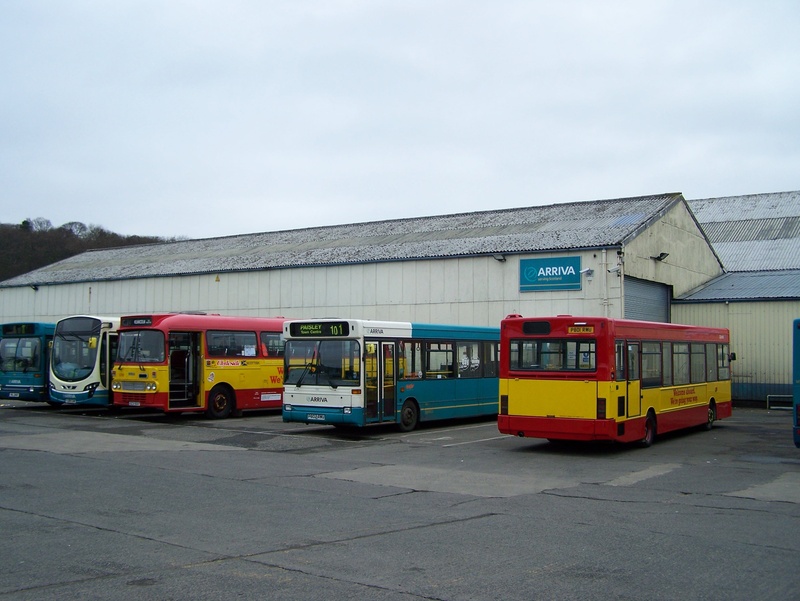 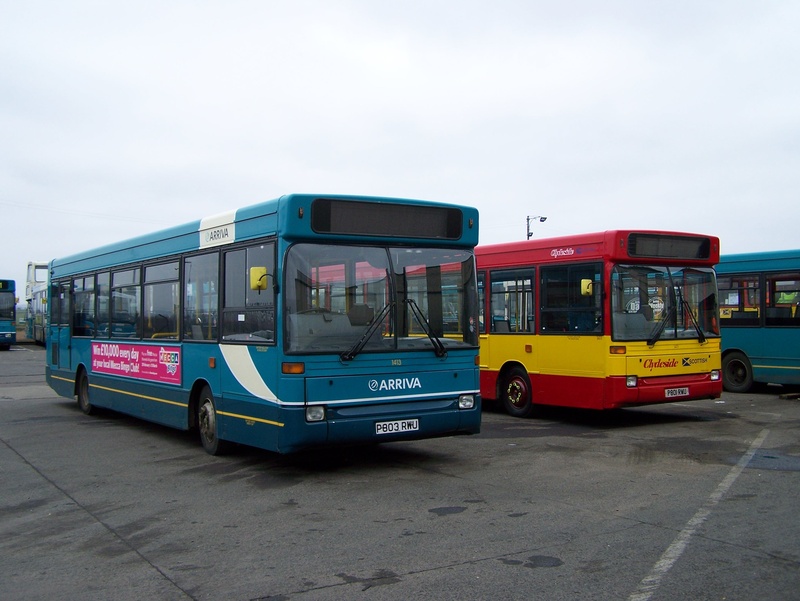 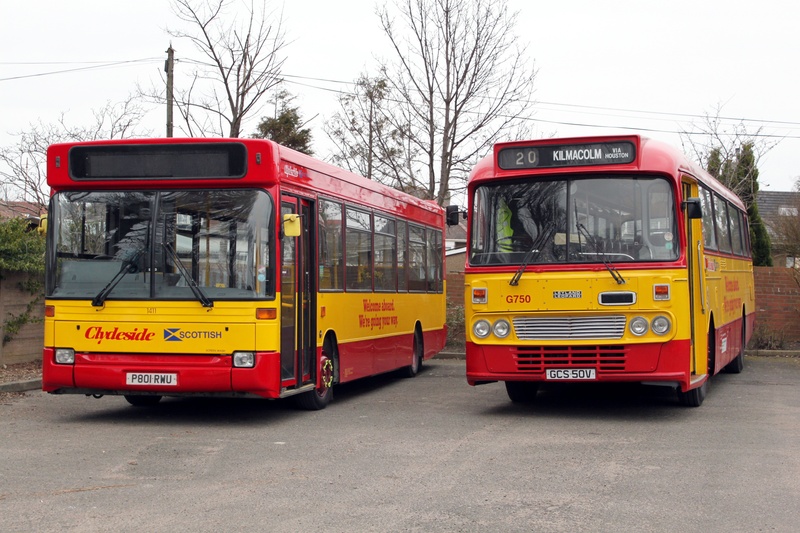 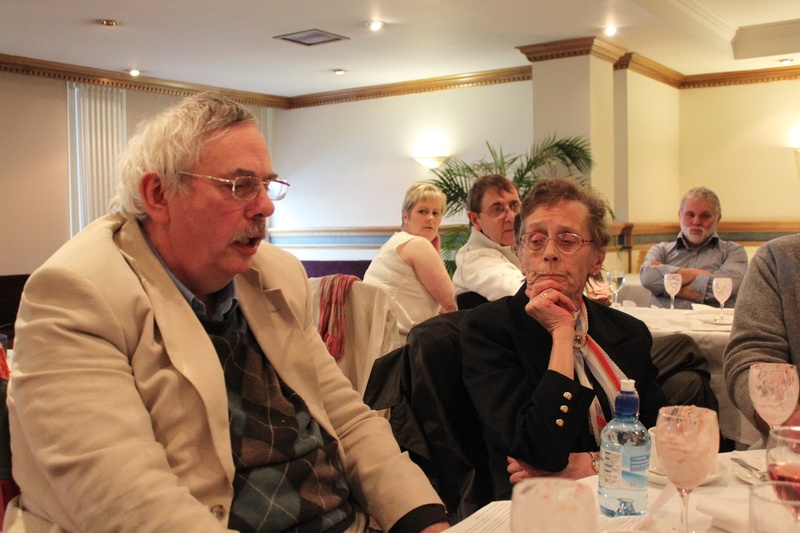 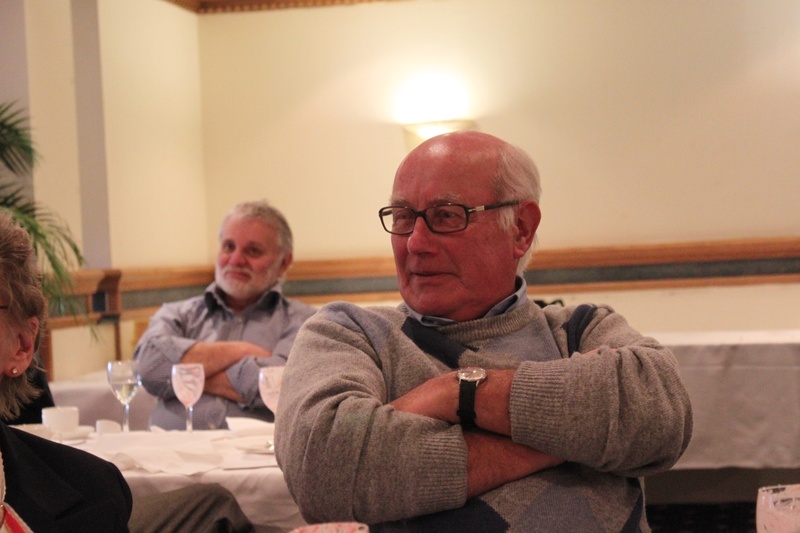 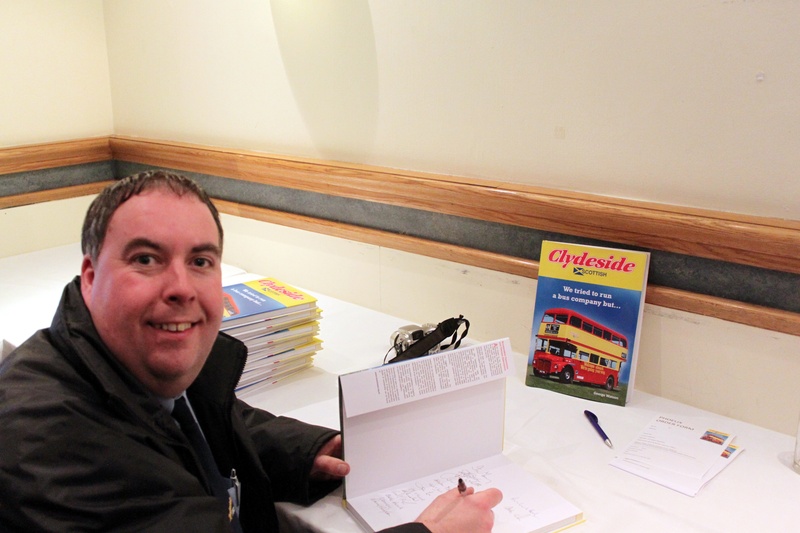 Book signing time! First and probably last time for me!

A Second Arriva Vehicle Gets The Clydeside Treatment!

Following on from P801 RWU receiving Clydeside Scottish livery in March 2011, a second Arriva Scotland West vehicle received Clydeside livery at the start of 2012. This time the vehicle was a newer Wright Bodied VDL SB200, YJ09 CVM, and this time the livery was the later red, yellow and white Clydeside Buses livery, as carried by GCS 50V in 1996. The repaint of YJ09 CVM was carried out shortly before the Arriva Scotland West operations passed to McGills of Greenock. It is believed the repaint was carried out to mark the origins of the Arriva operations in Scotland. The late 1990s livery sits very well on the modern vehicle and certainly brighted up the renfrewshire streets! Many thanks to the Arriva staff at Inchinnan depot for making the vehicle available for photos on the day of my visit. 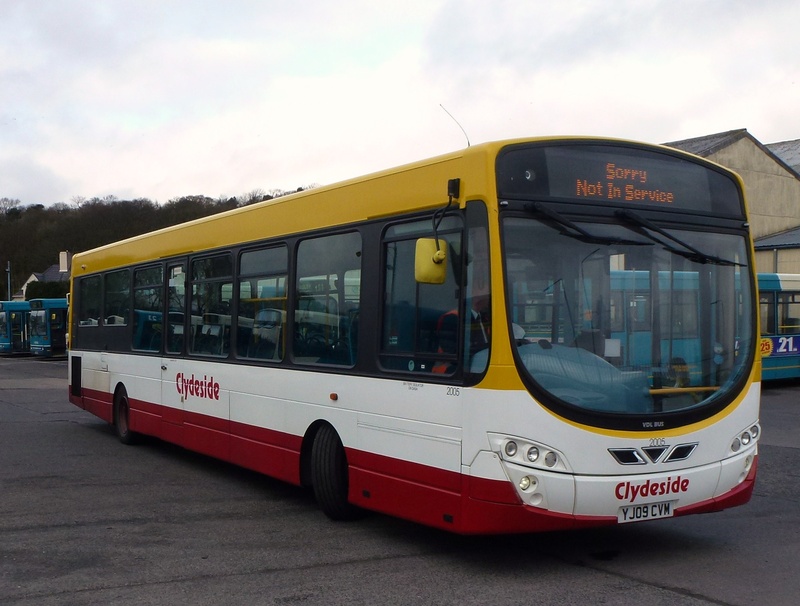 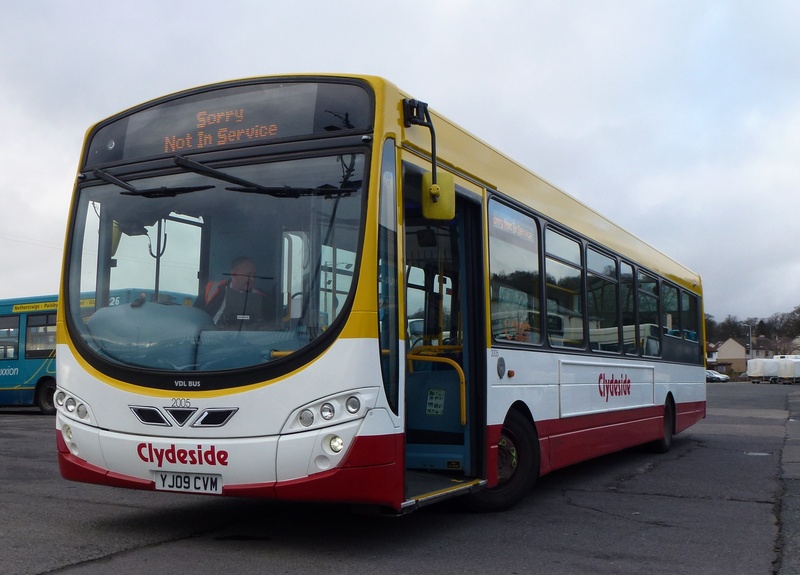