Below are details and pictures of various days out that myself, friends and other museum members have had on GCS 50V, HSD 73V, B509 YAT and E187 HSF. This page of course will be updated over time! If anyone has any other pictures taken on any of these days out please let me know!

Today GCS 50V headed off to the Falkirk Wheel with some special guests on board. During 2010 I offered the use of my Leopard with myself as driver for a day trip, all to raise money for charity. The prize raised over £450 for the Ayrshire Hospice, and Sunday 29th May 2011 was the chosen day for the trip to take place. I headed down to Kilwinning early in the morning to collect the winner May and her guests. An enjoyable run followed to the Falkirk Wheel. After a fantastic afternoon we headed back to Glasgow and enjoyed a fish tea at Harry Ramsdens before I safely returned the guests home to Kilwinning.  I would like to say that as usual GCS 50V preformed well, however all was not good with her today. Towards the end of the trip GCS 50V blew a cylinder head gasket, she did make it back to GVVT, although by the time I got her back some very strange sounds were coming from the engine. Repairs are planned to take place during the summer. 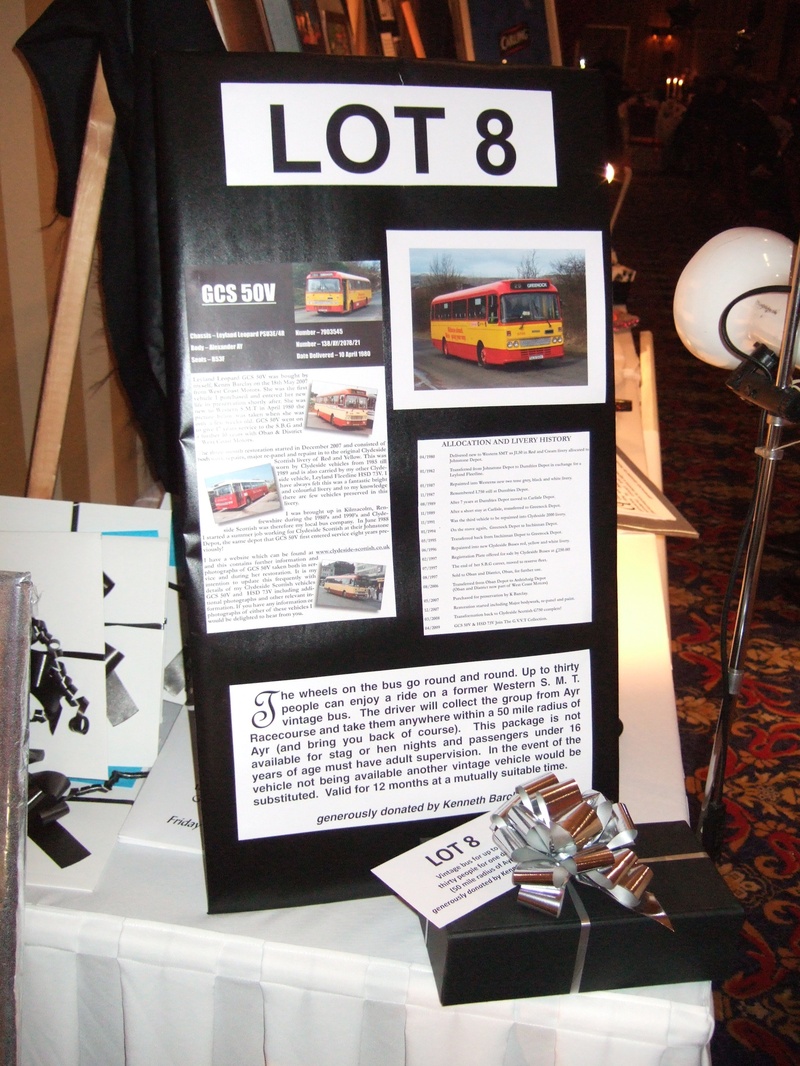 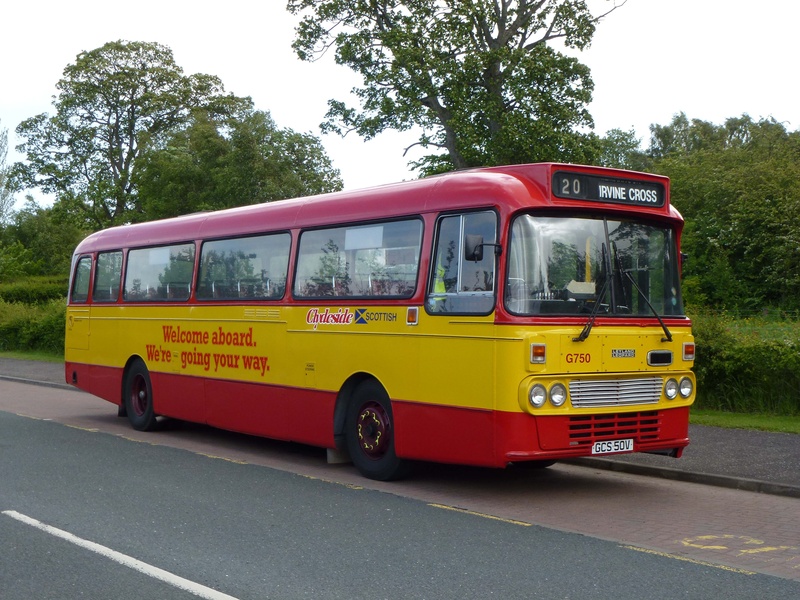 GCS 50V ready to collect her guests ready for a day trip to Falkirk. 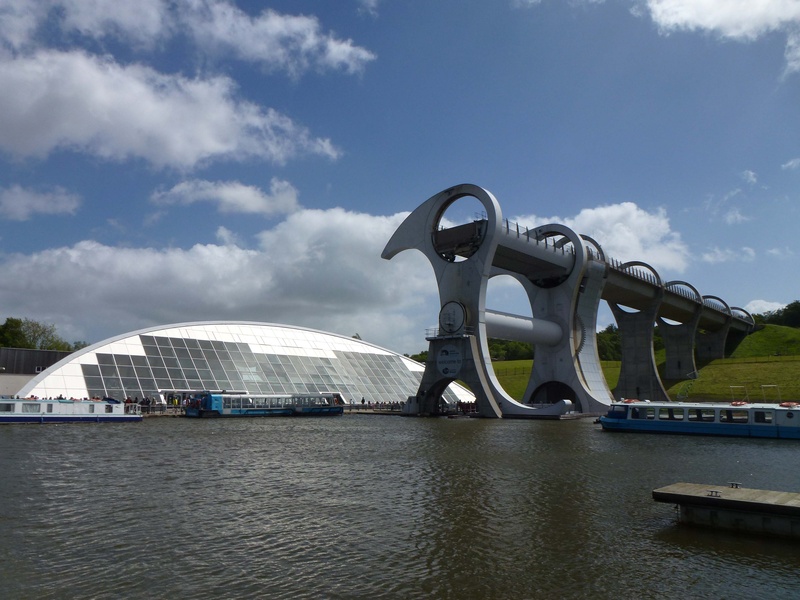 Our destination the Falkirk Wheel. 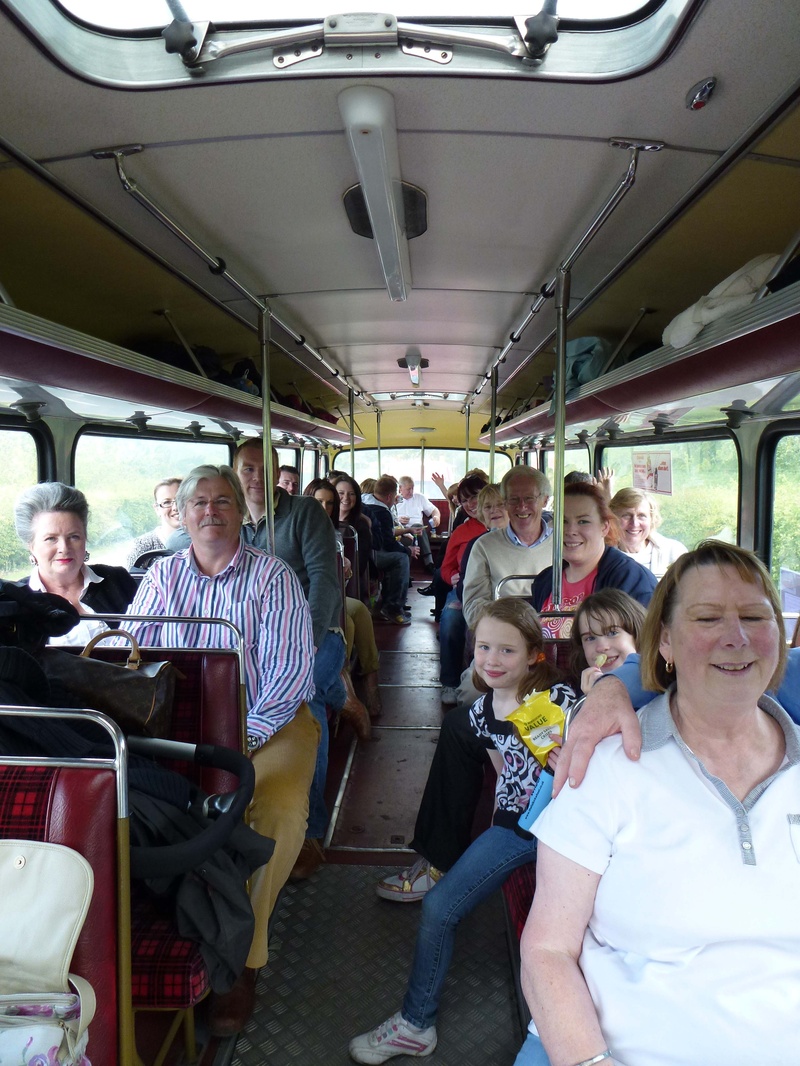 Winner May and her Guests after an enjoyable day at the Falkirk Wheel. 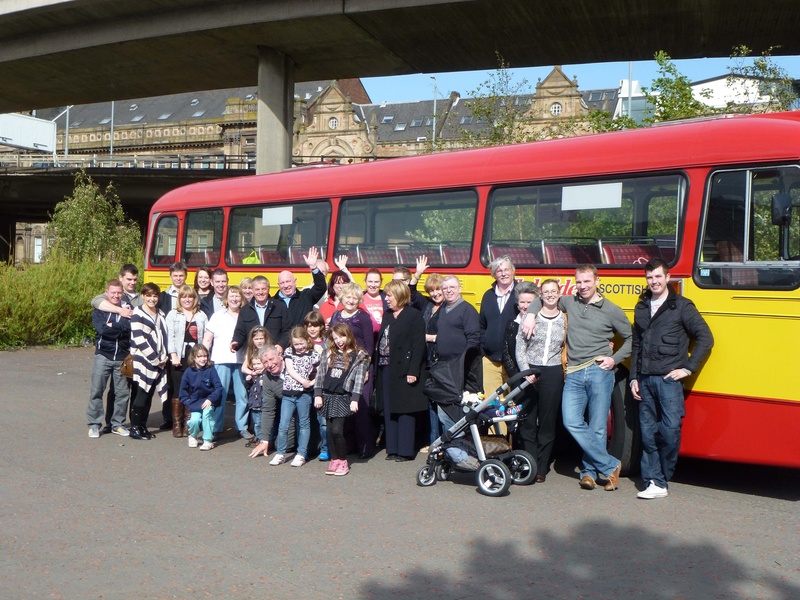 After a fish tea at Harry Ramsden's the guests are ready to head back to Kilwinning.

A small open day was held at the Beith Transport Collection's premises in Beith. A few visiting vehicles turned up, but the weather was rather poor. I took HSD 73V along during the afternoon and had a most enjoyable trip there and back and around the Glengarnock area. 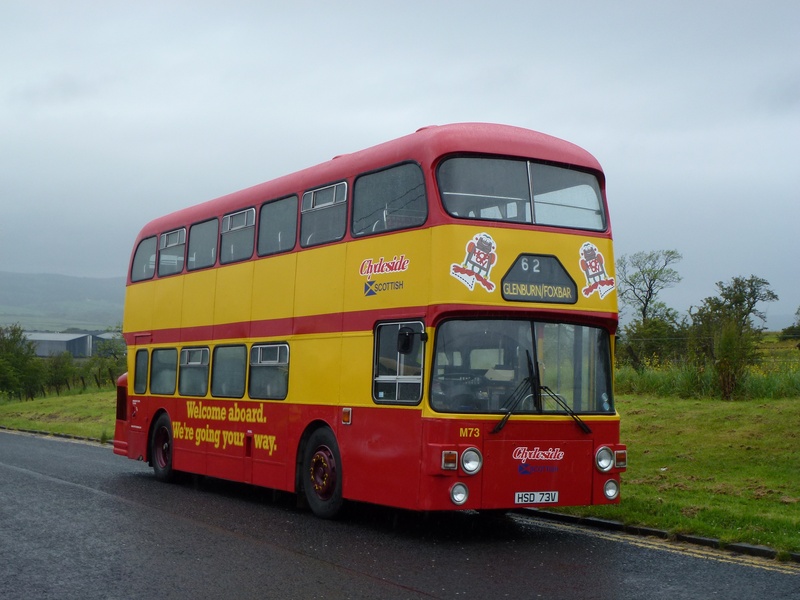 HSD 73V at Beith on a rather wet summers day! 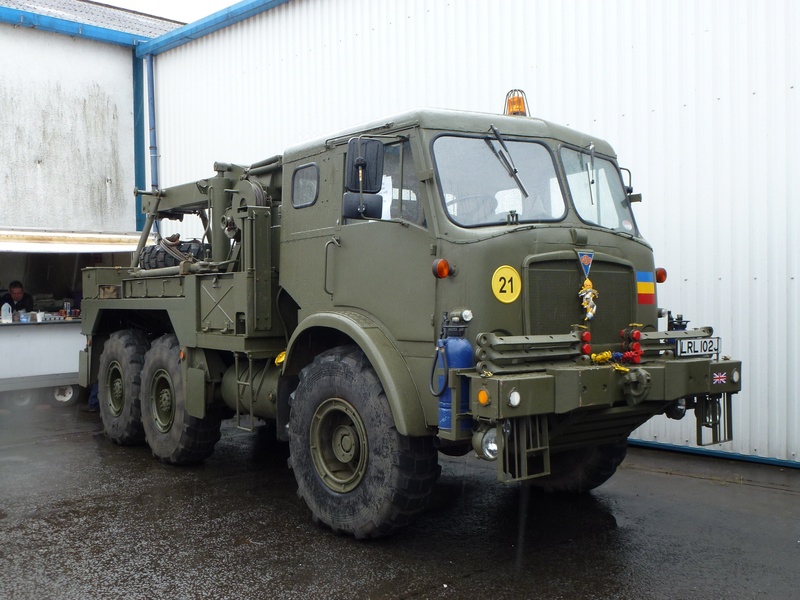 It wasnt just buses at the open day, this impressive machine turned up too!

This was the date of the 2011 S.V.B.M open weekend. My Leopard GCS 50V was still off road awaiting work to the engine so I decided to take HSD 73V along. It had been a few years since HSD 73V visited Lathalmond for one of the open days. She performed well and we had an enjoyable trip through. As well as operating a few trips around the site, my other vehicles took part in running the free service to Dunfermline and back. The weather was surprisingly good and a most pleasant weekend was had. 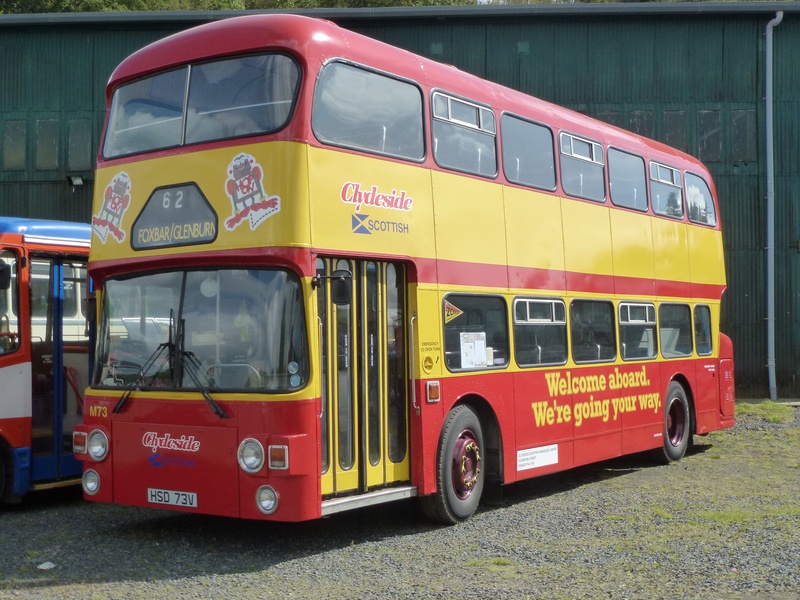 HSD 73V at Lathalmond in the August sun! 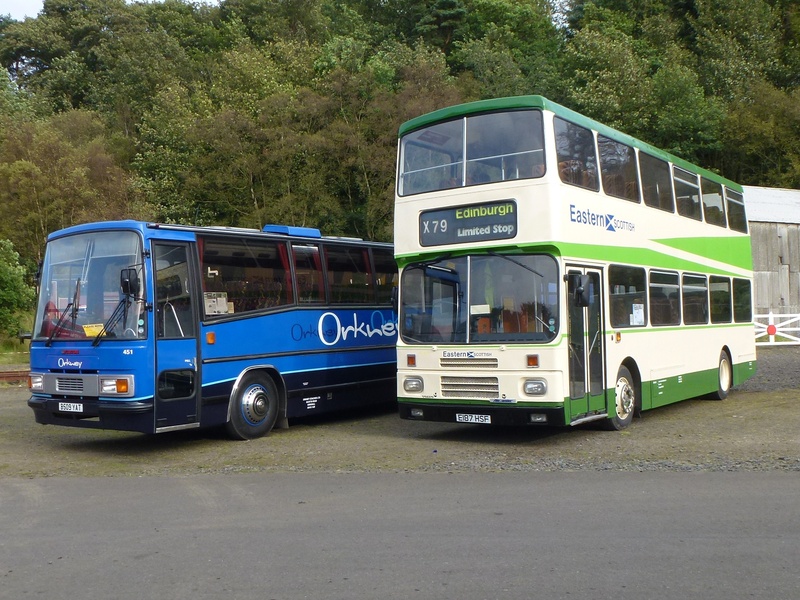 The last weekend in September was chosen to be the weekend for the SVBM at Lathalmond to organise a weekend event to celebrate 50 years of the Alexander Y Type vehicle. It was planned to try and get as many different Y Type vehicles to the Lathalmond site for the weekend. GCS 50V had been off the road since the end of May with a defective engine, however the replacement of the Cylinder Head Gasket and a pass at the MOT station meant she was able to take part in the event. The weather was good all weekend, on the Saturday we left GVVT and travelled to the Alexander Dennis factory in Falkirk where we had been invited to arrange a line up of as many Y Types as we could outside the factory where many years ago they had been built. After some photos we were treated to a factory tour to see the many new vehicles under construction. In the afternoon a road trip through Falkirk and Linlithgow was organised en route to Lathalmond. We left GCS 50V overnight at Lathalmond and returned to Glasgow with my Eastern Citybus E187 HSF. On the Sunday it was back up to Lathalmond for a Y Type running day. Many vehicles took part running trips either around the site, to Dunfermline or Kelty. The turnout was good, weather stayed almost dry! And GCS 50V appears to be back to her usual reliable self!

A few of the GVVT Y types await departure to the Falkirk Factory. 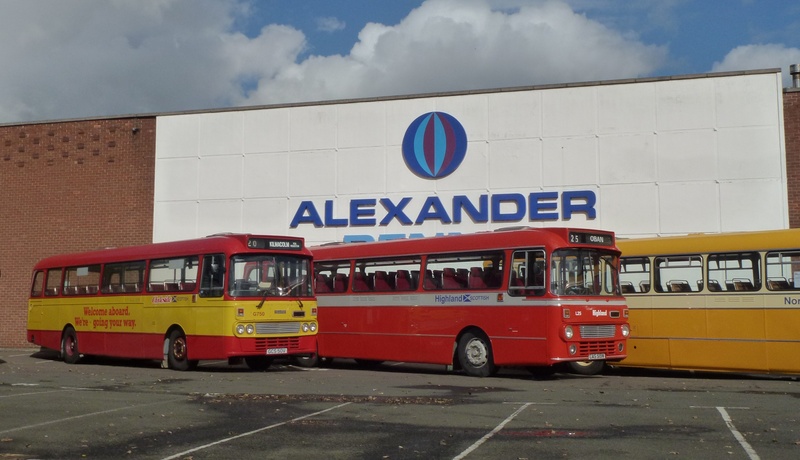 ADL Enviro 300 nearing completion. This is one of the current single deck Alexander products. 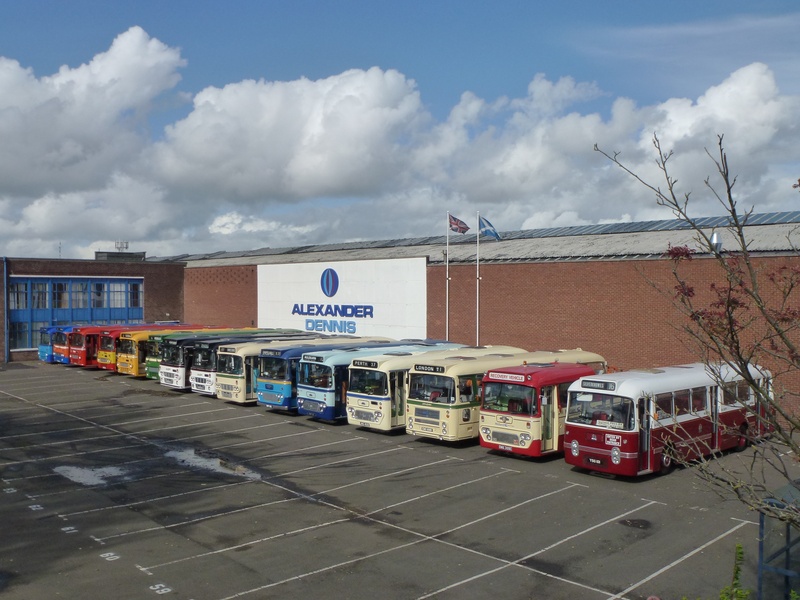 The Ultimate Y Type line up! After a bit of shunting about we managed to get all the Y Types in age order outside the Factory. 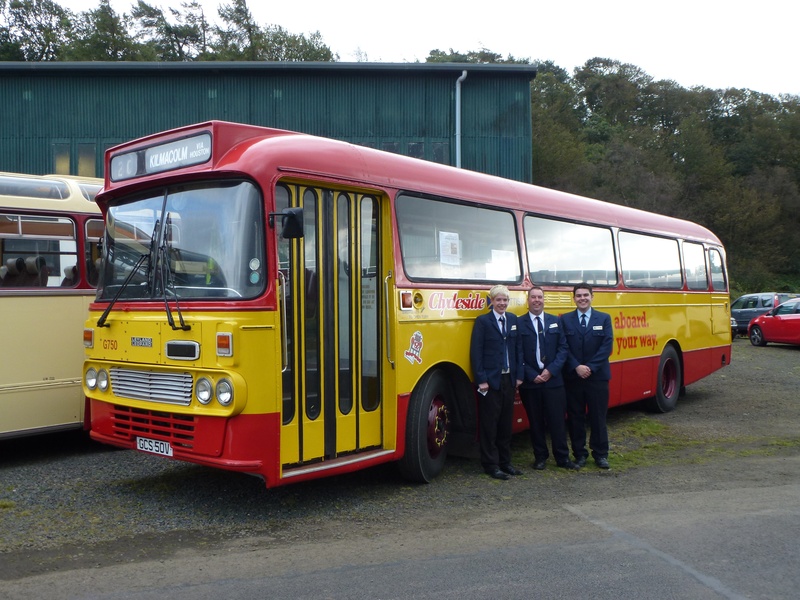 The Clydeside team await the next run to Dunfermline during the Y Type event.

On a rather wet and wild October day I and a few other GVVT members set out on a trip to the island of Bute. The trip had been arranged many months before and sods law the weather was fantastic the day before and after our trip! The day out started at 9am and after collecting the packed lunches from a local catering company we set of to Wemyss Bay where we were booked on the 11am ferry departure with my Clydeside Scottish Fleetline HSD 73V. The trip was organised by Tommy Graham who had previously taken his own Fleetline over to the island. When we were discussing the trip I asked Tommy why he was keen to use my Fleetline. It turns out that apart from being a big Fleetline fan, the bus being 9.84m long would be far cheaper on the crossing, over 10m and the price jumps up!

We arrived at Wemyss Bay at around 10.30am and took our place in the queue. The ferry Staff usually prefers to load all the cars first and position large vehicles like HSD last nearer the middle of the ship. The crossing takes around 35 minutes and during the crossing all passengers and drivers must remain in the passenger lounge, the crossing was smooth and shortly before arrival we were requested to return to the bus. I must admit being a bit worried that HSD wouldn't start, and if that was the case, what was plan B. I had visions of a ferry going back and forward with my bus stuck on board!

Once we arrived on the island and collected some more guests, we travelled up the A886 to Rhubodach where the ferry crosses to Colintraive. This is one of the shortest ferry crossings and takes only a few minutes however we planned to stay on the island and parked up to enjoy our packed lunches. Once we got going again we travelled back into Rothesay to visit the West Coast Motors depot. This is a rather interesting depot being a former Tram depot (complete with some rails still in place) and also a former Clydeside Scottish depot. The Staff on duty were most welcoming and appeared to enjoy having a vintage Clydeside bus back at the depot.

We then travelled over to Ettrick Bay on the west of the Island and decided to park up for a coffee and comfort stop. With the rain battering down and strong winds, we thought we would have been the only customers, however inside we found a rather busy little cafe!

Once we got back on the road we travelled the long road back to Rothesay, the A844 stopping for a few photos on route. Next port of call was Kilchattan Bay terminus, where due to the single track road, each bus arriving has to complete a 3 point turn before the return journey! The last leg of the journey was back up to Kingarth and over the hill back to Rothesay. We were making good time till we got stuck behind a herd of cows off to be milked. It certainly made some interesting pictures a vintage bright red and yellow double deck bus slowly moving along a county lane behind a herd of cows!

The return journey was uneventful and our last port of call was Harry Ramsdens back in Glasgow for an enjoyable Fish Tea. We were a bit surprised at the name of the Bar within the restaurant, I guess they were expecting us!

HSD 73V performed great all day. Always a nice vehicle to drive, However John & I found its drive much improved after carrying out a complete service on her a few weeks before our trip. We were also very impressed with how little fuel she used. Filling her up after her 126 mile trip, we were pleased to find she only used 48 litres and if my maths are correct that makes it approx 13mpg!

Overall a fantastic day out, a wee bit less wind and rain and a bit more sun would have been great but can't have everything! 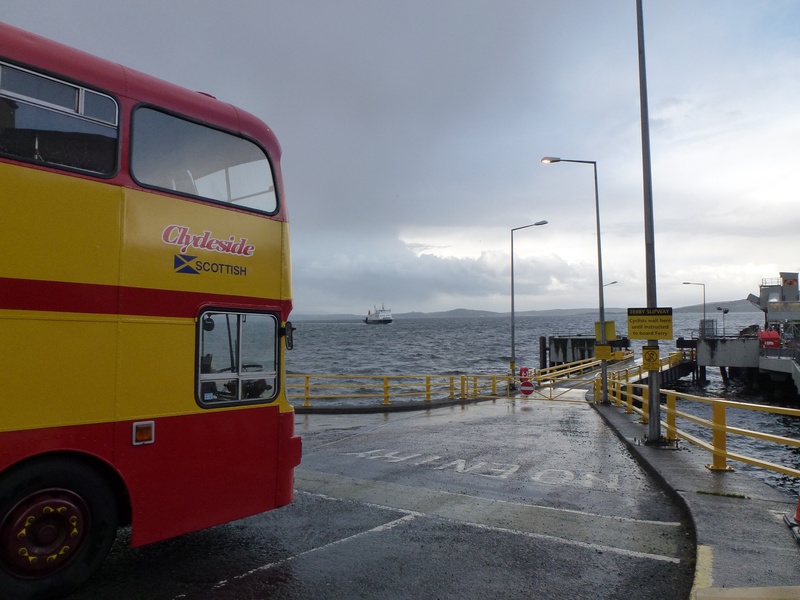 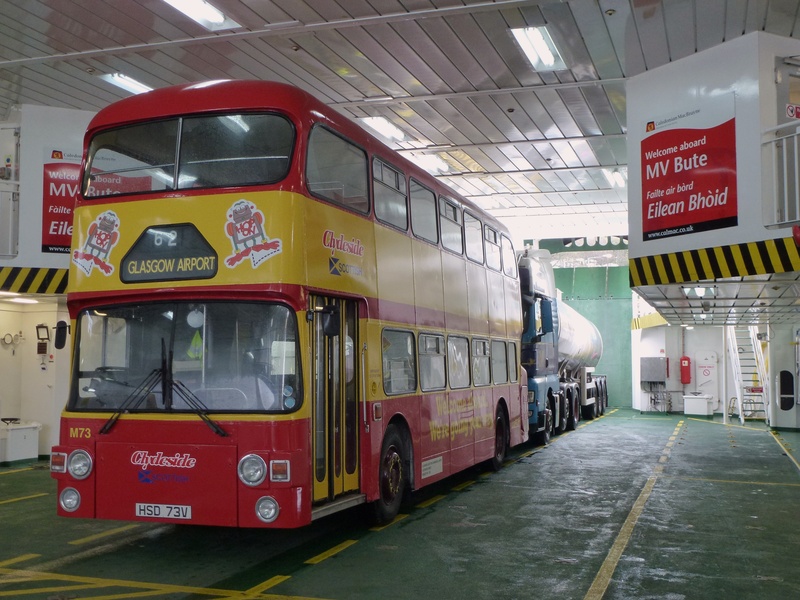 M73 Safely on board MV Bute, going to Bute! 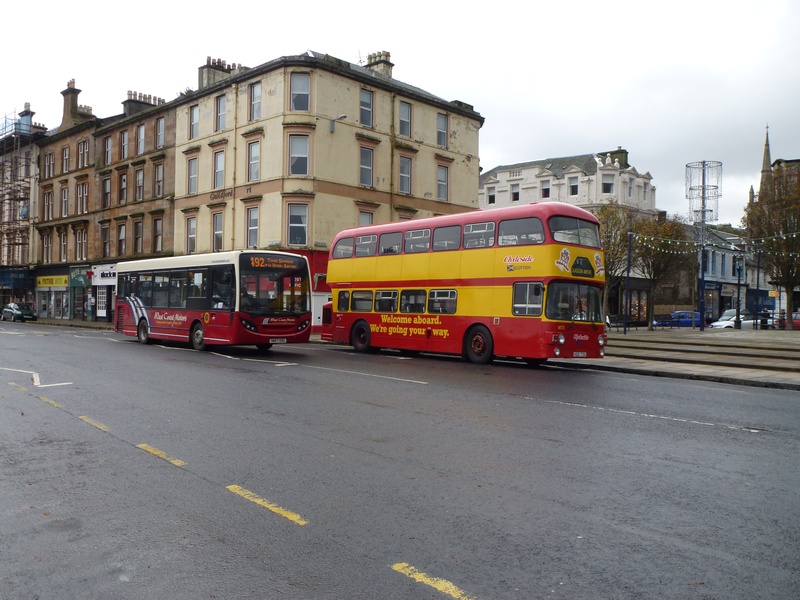 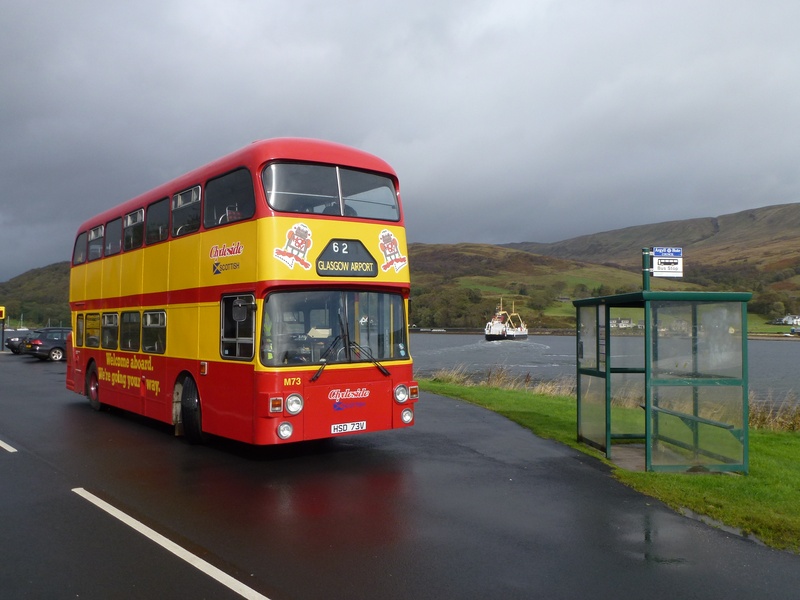 M73 At Rhubodach where the ferry crosses to Colintraive. 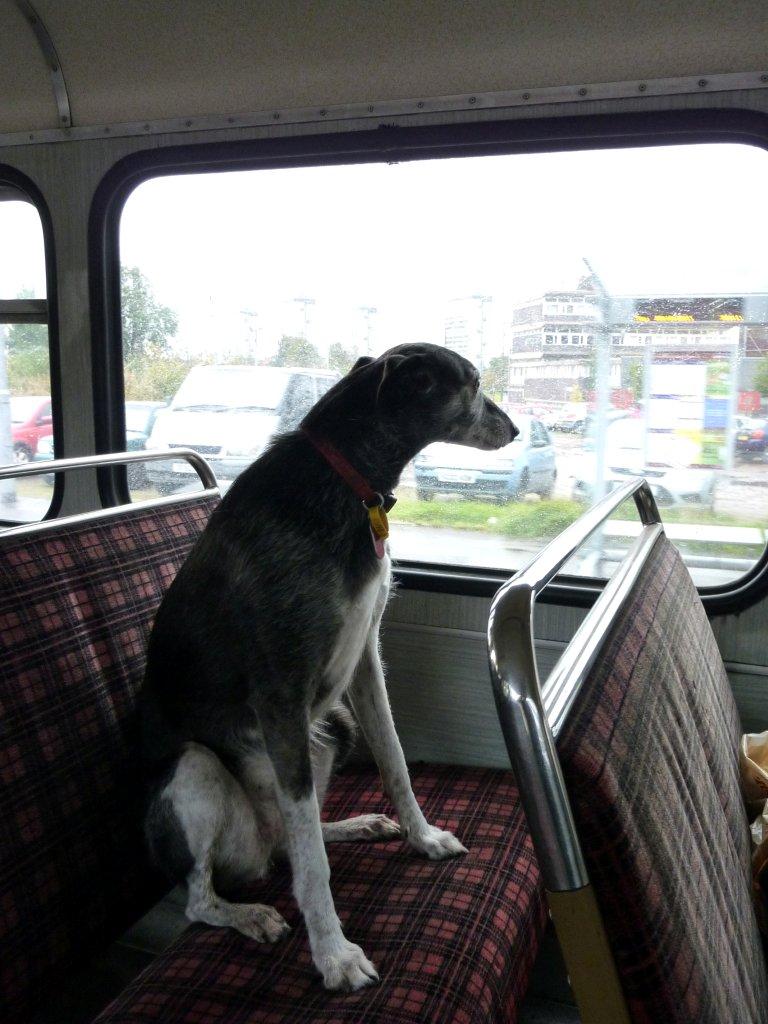 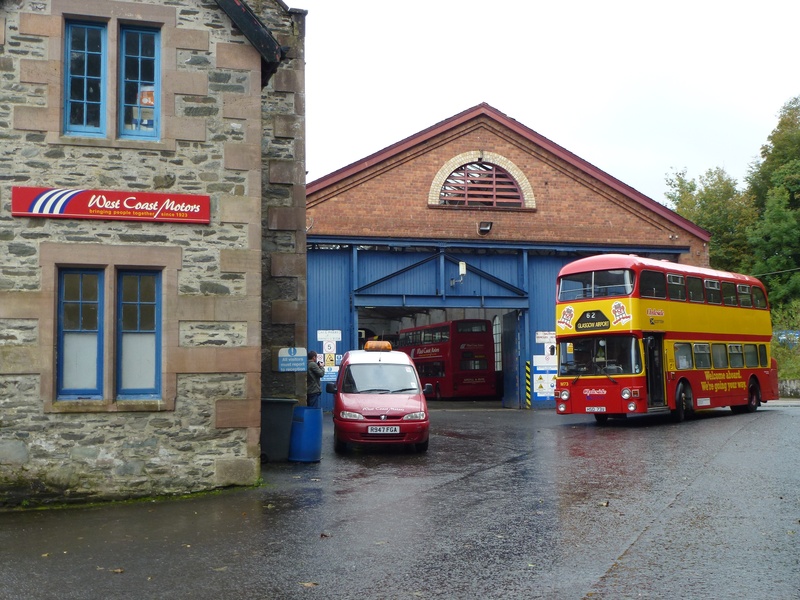 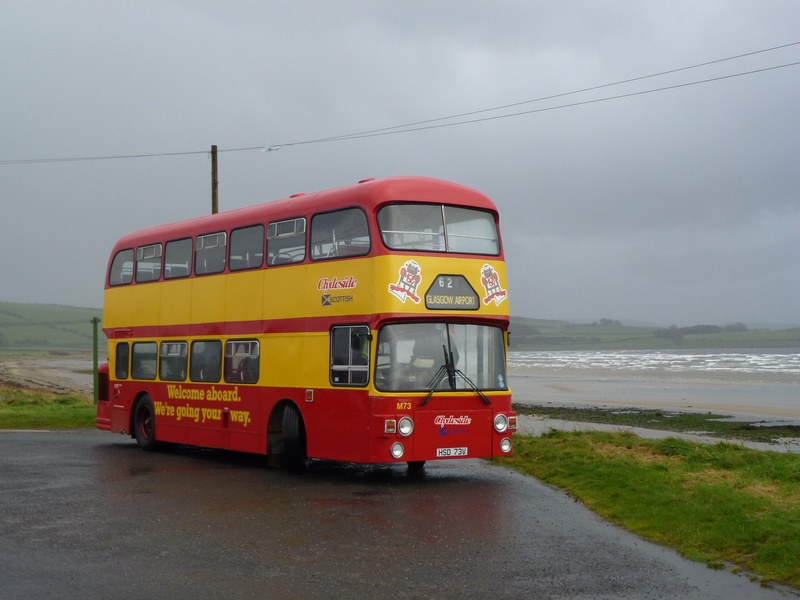 Anyone for the beach today? M73 at Ettrick Bay. 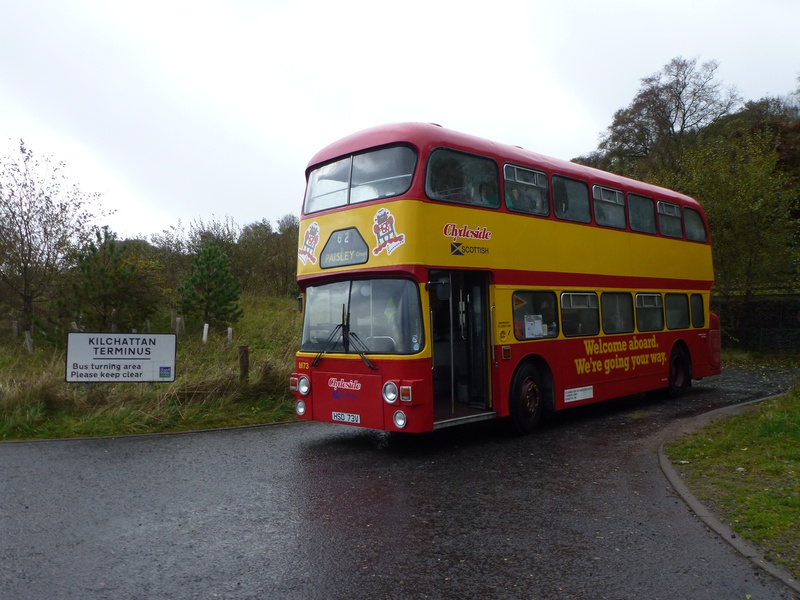 HSD 73V at Kilchattan Bay Terminus, due to the size of the road each bus needs to complete a 3 point turn! 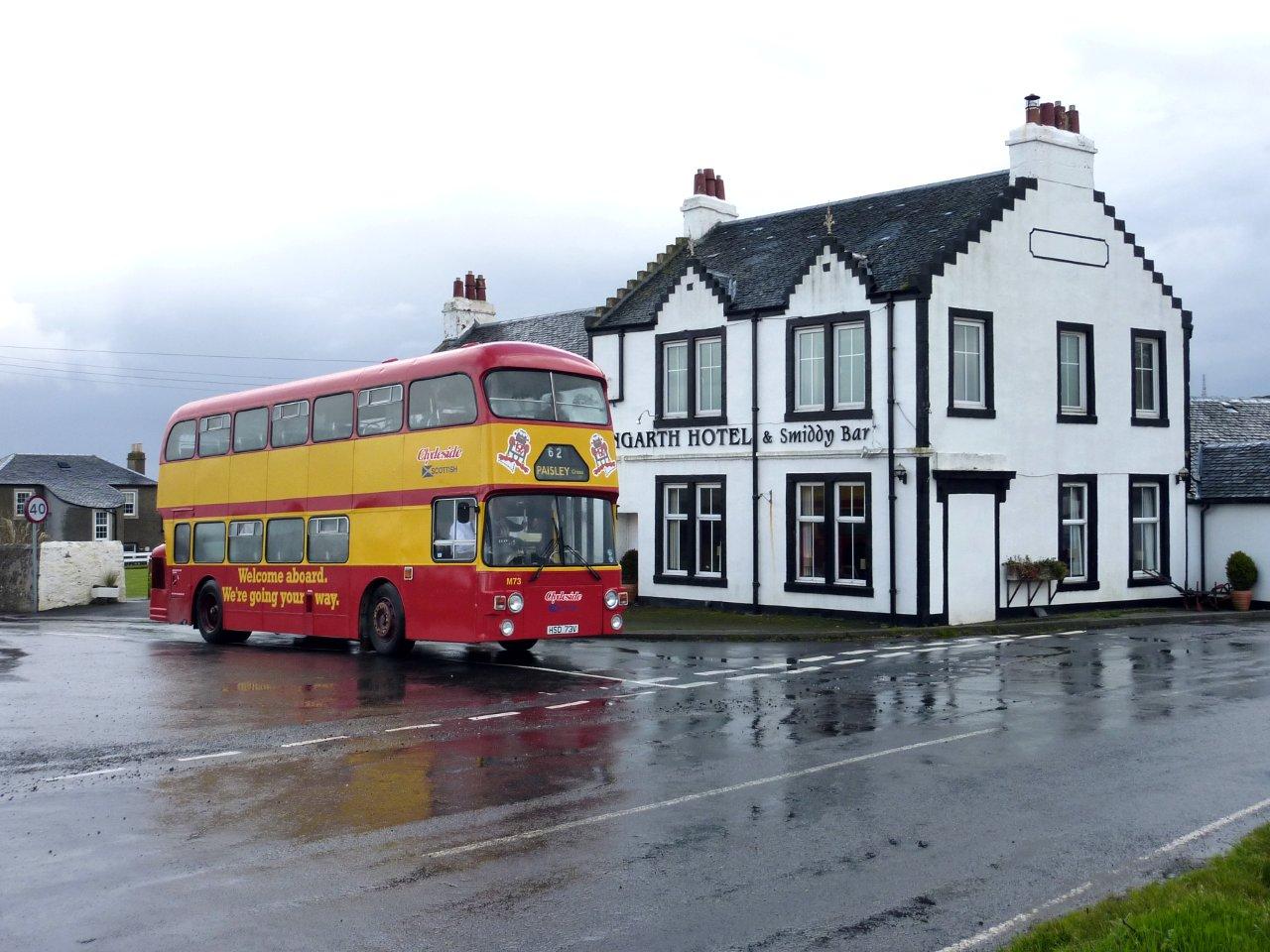 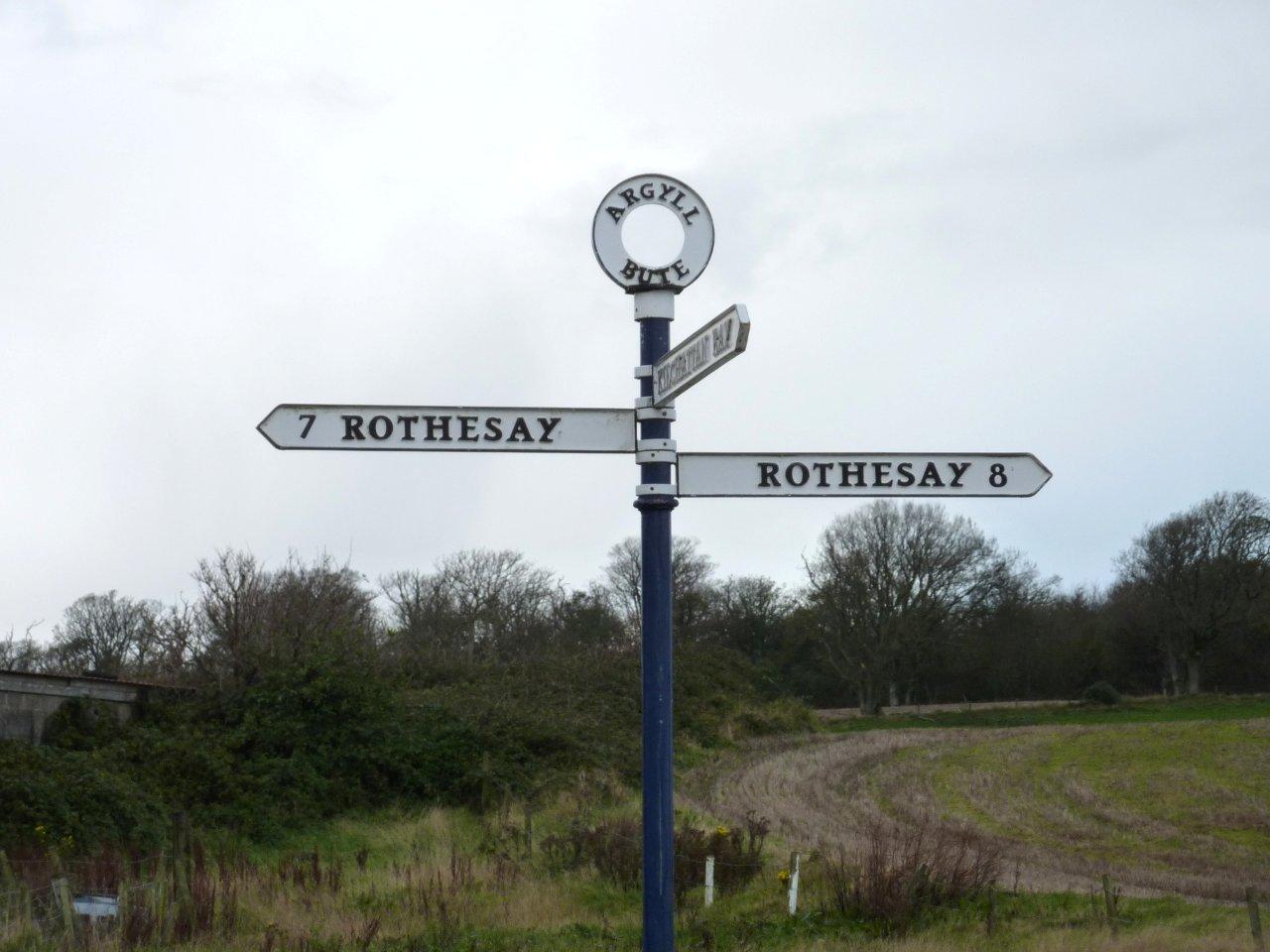 Any idea which way back to Rothesay? Photo James Williamson. 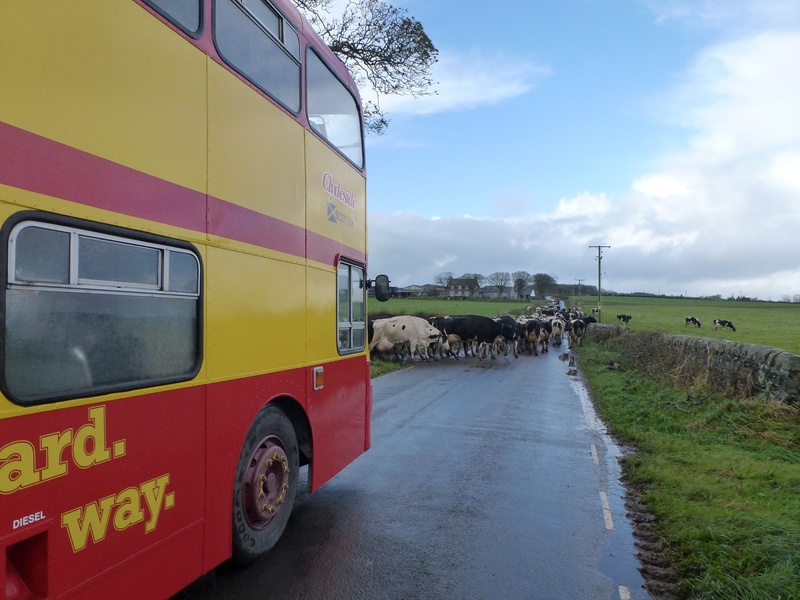 Now lets get a MOOve on please! 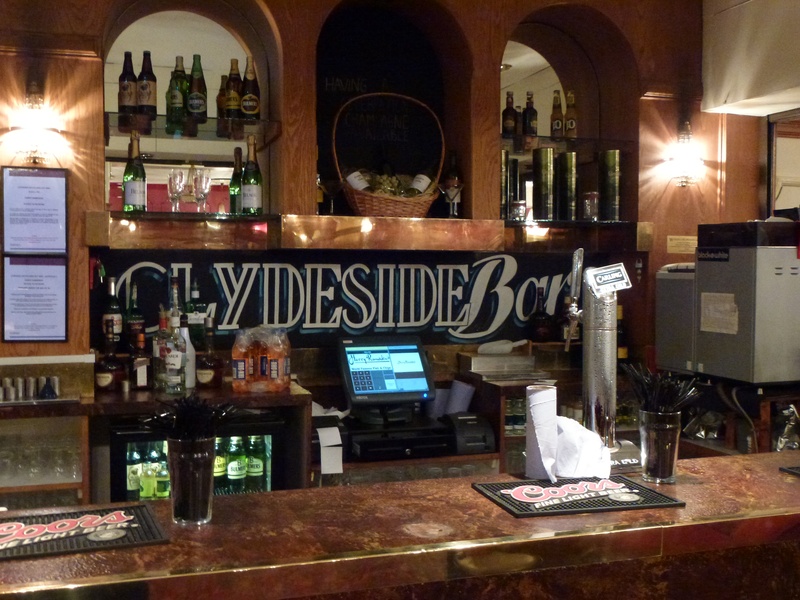 The Clydeside Bar in Harry Ramsden's how fitting indeed!

Today was the MBF (Model Bus Federation), Scotland West's annual model bus show at Bishopton community centre. Rather than taking the car as I have done in previous years, I decided to take HSD 73V along. Myself and a few other GVVT members set off from Bridgeton at lunchtime and followed the Clydeside Scottish 23 route to Bishopton. After departing Glasgow city centre, we passed Paisley Road Toll, the site of the former Garden Festival, Govan, Braehead, Renfrew, Inchinnan, Erskine and finally Bishopton. Its been a few years since I have covered this route in full, but I was still able to navigate round the various bus only sections of Erskine linking the housing developments. Thinking back the last time I probably covered some sections of this route was on a Clydeside Scottish vehicle in the late 80s! As well as passing the former Clydeside Scottish depot at Inchinnan, we also passed another Clydeside Scottish bus, not my Leopard but the Arriva Dennis Dart currently wearing Clydeside red and yellow livery. It must have been a few years since two Clydeside buses passed each other just outside Renfew. After the show the return journey was made via Paisley town centre, Paisley Road West and the new M74 motorway across Glasgow. A most enjoyable day.

More details about the MBF Scotland West can be found at: 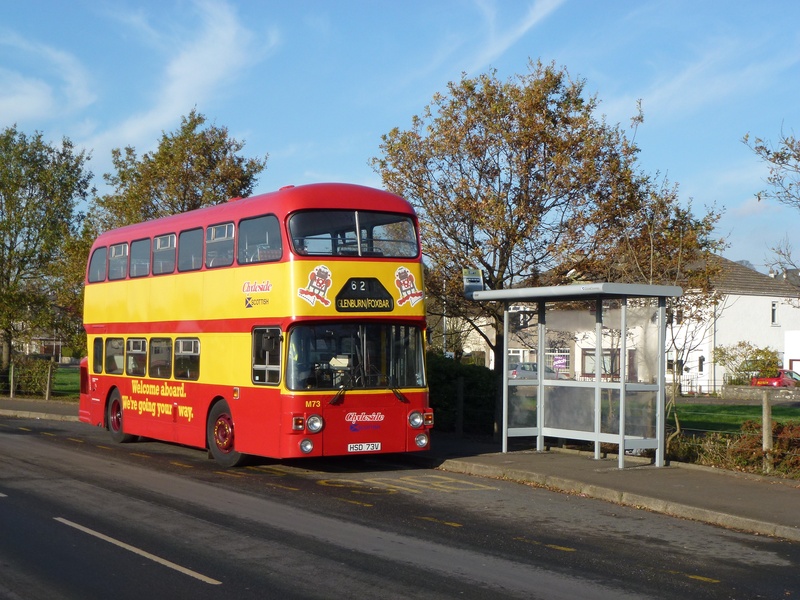 HSD 73V Enjoying the November sunshine parked up in Bishopton outside the Community Centre.

Today myself and fellow GVVT member John Kennedy, visited the First Edinburgh Livingston Depot to collect some Volvo Citybus parts from a former Strathclyde's Buses vehicle that was about to be sent for scrap. Rather than hire a van, we decided to use my Fleetline HSD 73V to transport the goods. An enjoyable day, although always sad to see another fine vehicle reach the end of the road. 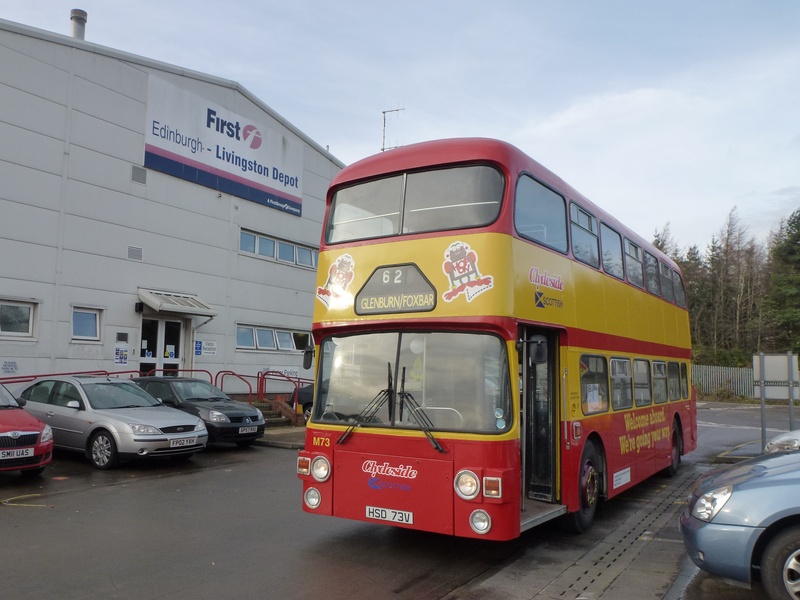 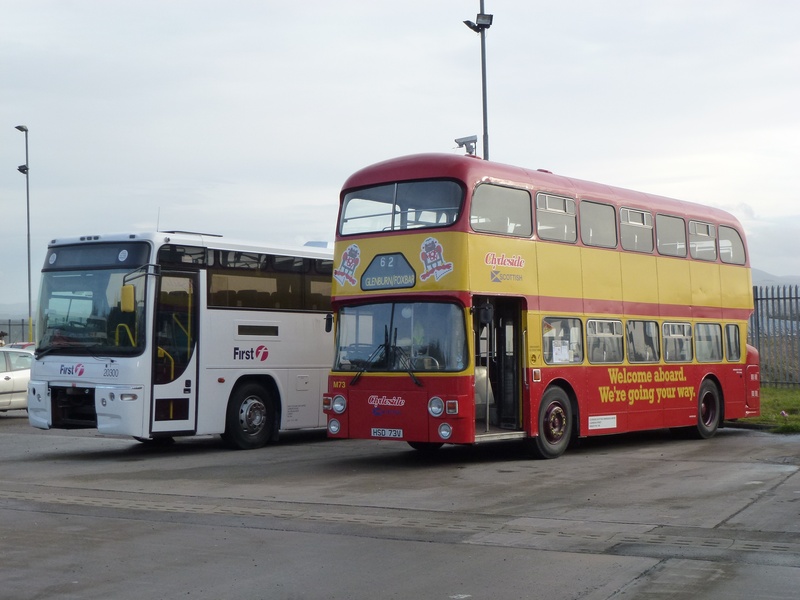 The coach on the left from 2004 is withdrawn from service, the bus on the right from 1980 is alive and doing well!